We're sorry to say that there will not be a regular episode of The Expanded Fandomverse this week.  Our guest, Joseph Yglesias, had cancel on us at the last minute due to a medical emergency.  A quick trip the hospital later, we are happy to report that Joseph is doing much better, and will be back with us next week to talk all about bootleg Star Wars merchandise.

BUT, never fear, we would not let a week go by without releasing some kind of audio for your listening pleasure.  Instead of a regular episode, we are going to put out one of our Scum & Villainy episodes.  Scum & Villainy is our "aftershow" where just allow ourselves to ramble on.  The show is un polished, unedited (for the most part) and always long winded!

We also use our Scum & Villainy episodes to respond to listener feedback.  Back in December of last year, we received and email from Mr. Joshua Starnes.  Joshua is a professional film critic who had sent us a letter about the perception many of us have about the prequels.  After reading his letter, we invited him on to explain his point of view in a S&V episode.  -  You can listen to our conversation HERE.

WELL…  Mr Starnes feed back lead to us receiving an email from a self proclaimed Film Critic Critic, Mr. Michael Coates.  Michael stongly disagreed with almost everything Joshua had said!  His email read in part…


"So to sum up, Josh is a reviewer and is able to detach himself emotionally from the film and as such his take on it is better than fans whose opinions can be dismissed easily because they care too much about Star Wars.
What a load of self righteous, sanctimonious rubbish.
20 minutes in so far and I just can't agree with anything; Who says the prequels get better as they go on? Who says green screen makes something bad? Trying to be clever by pointing out an inverse correlation between CGI and quality (designed to trip up fans) is only relevant when it's not made up in the first place.
I personally do not anyone that thinks AOTC is better than TPM and I definitely don't know anyone who think ROTS comes anywhere close to the quality of the original trilogy (is it better than the other two? Who knows, maybe, it certainly isn't leaps and bounds ahead!).
If these are genuine thoughts and feelings amongst fans then they are not ones that I know and not the general consensus from the countless forums, comments and blogs that I have read on the subject. Furthermore, no one blames CGI for them being bad films, everything I have read suggests excessive CGI only manages to compound issues already present in the film and this is echoed in interviews with the cast who complain how difficult it is to have a conversation with something that isn't there or walk around a room that isn't there or to act shocked at things that you're 'seeing' but never actually seeing. The conversation between Anakin and Palpatine may well be one of the best in the prequels (I didn't particularly think it anything special and I don't remember it making a lot of sense either) but this should be no surprise because it's a conversation between two people, who are there to react off of and work with.
I could go on but it's fair to say I'll only get more annoyed at the way fans are represented here."


After reading this, I just knew I had to get Michael on to tell us more about what he thought!  So we connected and recorded and episode in late April.

And as a note, because the Scum & Villainy episodes are unpolished (not that our regular shows are so slick!), we  do not release them in our regular feed.  So, if you subscribe to the show on iTunes or Sticher, this episode wont show up in your feed, it can only be found our our website, TheExpandedFandomverse.com

AND, like Michael and Joshua, if you have something you feel very strong about, please, let us know!  We love your feedback!  Tell us what your thinking, and maybe we will get you on a future episode of Scum & Villainy!  Email us anytime at TheExpandedFandomverse@gmail.com! 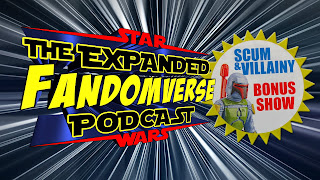 Posted by TheExpandedFandomverse at 2:23 PM No comments:

In this episode of Scum & Villainy, we continue the conversation we started with Joshua Starnes in episode 20 of The Expanded Fandomverse.

Joshua is a professional film critic who sent us a letter about the perception many of us have about the prequels.  When I read the letter, I knew it was one we had to address on the show.  But more than having Jason & I talk about the letter, I thought it would be even better to have Josh come on to discuss his point of view.  And so he did!

But, the 10 minutes we allocated for Joshua on The Ex[anded Fandomverse was not enough to fully cover this topic.  So, we kept talking, and kept recording, and this episode of Scum & Villainy is what was said!

I hope you enjoy it, but more importantly, I hope it makes you think.  And even better, we'd like to hear what you think about it!  Please, send us an email at TheExpandedFandomverse@gmail.com, or comment below!  Who knows, your letter may be the next one we read on the show! 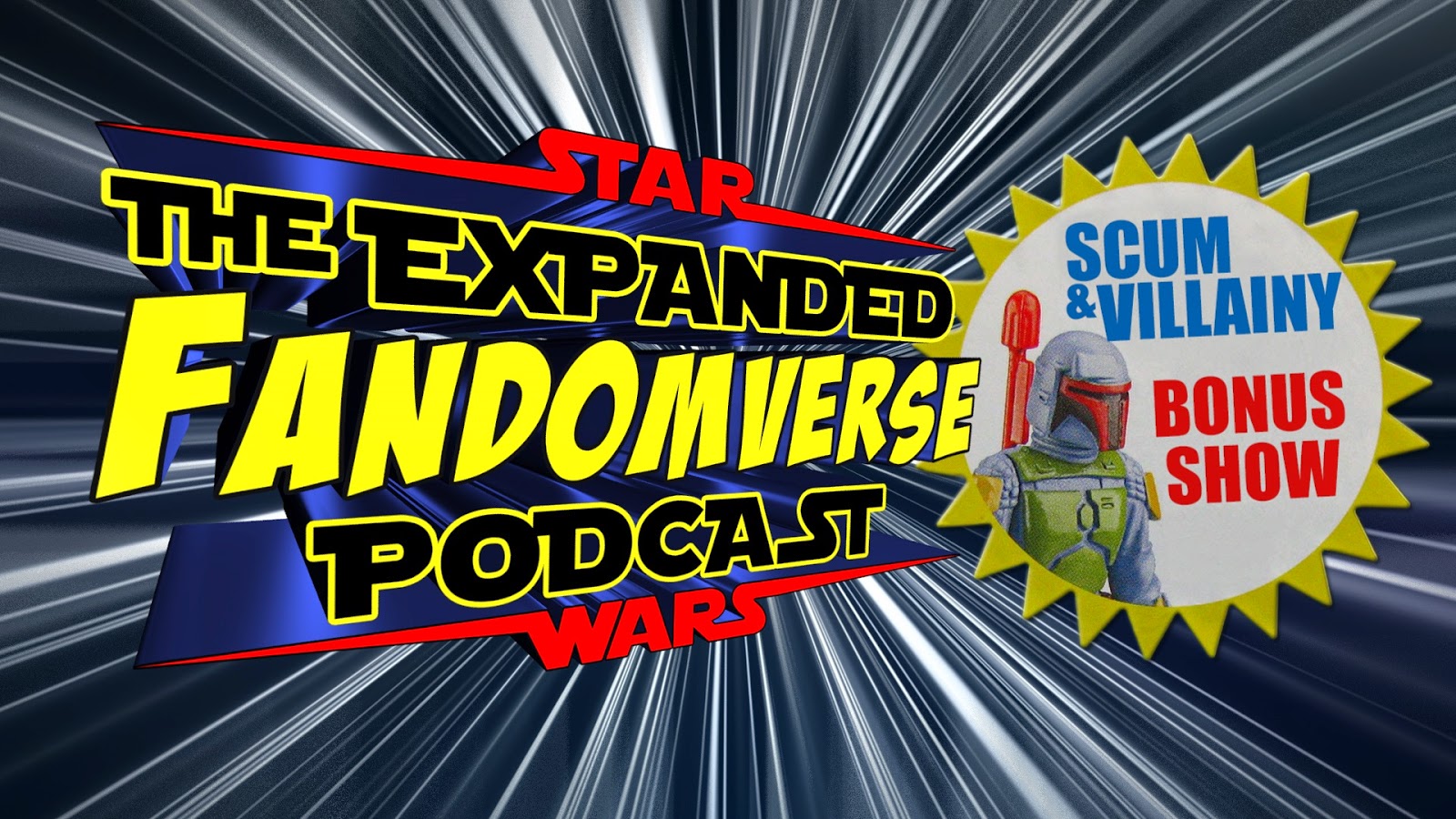 Posted by TheExpandedFandomverse at 2:22 PM No comments:

EPISODE 006 "The Girl From Ipanema"

It's Wednesday, and that means another new episode of The Expanded Fandomverse.  Well...

Maybe not.  We had some "technical difficulties" with this weeks recording.  It's nothing too bad, we're still going to get a show out this week, it just may be a day late.  ---We're working on it!

Anyway, to tide you over, here is an episode of Scum and Villainy.  This time out it was just me, Tim, no Jason, but I was joined some others.  First up we have Dan Wilcox, a former guest on the show from back in the beta period.  And next there is Joe Curcio, another guest from the beta period.
I was never able to release my original conversation with Joe due to previous "technical difficulties".  I always felt bad that I wasn't able to get that talk with Joe out because he was such a nice guy.   Joe, thanks for all your patience.  I'm glad you were able to join us on this Scum and Villainy, and please come back any time!

I also tried to get our old friend Dan White in on things, but again, "technical difficulties" (I'm cursed!) kept him from joining the conversation.  So, after Dan and Joe were gone, Dan White jumped back on the line, and we spent some time chatting.  So, this episode of Scum and Villainy is in two parts; Dan, Joe & I, and then just Dan White and myself.

So, sit back, enjoy our babbling, because really, that's all this is, just us babbling.  There are no themes here, no topic thread through out, it's just a bunch of Star Wars fans talking about nothing in particular.

Posted by TheExpandedFandomverse at 2:20 PM No comments:

It's time for another episode of Scum & Villainy!

Scum & Villainy is our "aftershow".  On The Expanded Fandomverse proper, we try to keep things tight; we know you're not here to listen to us babble.  We want to keep the focus on you, the Star Wars fan, through our conversations with our guests.  BUT....

Babbling can be so much fun!  (Fun to do, but maybe not so fun to listen to though!)  So, what we do is record these aftershows for our own amusement.  If you subscribe to the show via iTunes or Stitcher, don't worry, we don't stick these in our RSS feed.

With Scum & Villainy, we don't edit anything; not the audio nor ourselves!  So, we may cross the line into PG-13 territory, something we don't do on The Expanded Fandomverse.  So, consider yourself warned!

In this episode, Jason and I take the opportunity to answer the newest set of Mind Probe questions for ourselves.  We feel it's only fair that if we are going to subject our guests each week to these questions, we should have to an answer them as well.  - Also, we did this show over the phone, so please forgive the lower audio quality.

Posted by TheExpandedFandomverse at 2:19 PM No comments:


As I mentioned last week, we are now going to a Wednesday release schedule.  Now, I'm sure there are some of you out there who are saying "But Wait! I've planned my whole Tuesday night around your show!"  Well, don't worry, we wont let you down this week!  Tonight we are happy to bring to you another episode of Scum & Villainy: The Expanded Fandomverse After Show.

For those of you who haven't heard an episode of Scum & Villainy before, let me tell you a little bit about it.  It is just Jason and I talking.  Nothing more, nothing less.  Sure, sometimes we have special guests (in fact, we welcome ANYONE to come join us for a round of S&V!  Just contact us and ask to be on.  It's That Simple!), but really, it's just the two of us babbling.

Why?  Because we want to.  And because it's fun to talk.  It lets us cover topics we wouldn't normally cover on The Expanded Fandomverse, and we don't censor ourselves.  We don't get crude, but some words may be said.

So, this week, Jason and I recount our  "brush with greatness" moments, I educate Jason about the connection that Neil Diamond and ET share, Tim sings, and we discuss our love of NASA and our hopes for a new space race.  All this and much, much more!  So sit back, listen and enjoy.  Hopefully this will tide you over until tomorrows episode is released!

Posted by TheExpandedFandomverse at 2:18 PM No comments:

Welcome to another episode of Scum & Villainy.  The Expanded Fandomverse after show where we allow ourselves to babble, and cross over into PG-13 territory.

While taking a second look at the set photos from Greenham Common, I noticed something that hadn't caught my eye before.  I sent the photos to Jason, and he came right back with "Time for an episode of Scum & Villainy!"

Unfortunately, I was still at work at the time.  But, the office was pretty empty, so I said what the heck.  So, instead of taking a lunch hour, I took a Star Wars hour, which is all the better!

To find out what I saw, you'll have to have a listen to the show!  But maybe these photos will give it away... 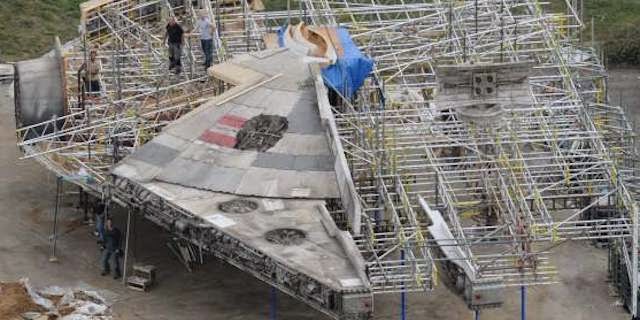 Posted by TheExpandedFandomverse at 2:17 PM No comments:

EPISODE 002 "This Must Be What Star Wars Is Like Overseas"

This weekend, after Jason and I finished recording, we had 30 minutes to kill before we were scheduled to interview our next guest. So, what did we do with all that free time? We babbled out way through another episode of Scum & Villainy!

We cover our love of the Radio Dramas, the fact that kids today don't know the fun that can be had with a cassette tape, and I once again regret calling the show The Expanded Fandomverse.   Enjoy!

Posted by TheExpandedFandomverse at 2:15 PM No comments:

Please visit www.TheExpandedFandomverse.com to see all the great shows in the TEF family!